Creating a Memorial DVD is an excellent way to remember a lost loved one.  When my brother Kirk passed away suddenly in April of 2009 we were shocked and saddened.  Since I was already the family custodian of all the photos I arranged big Kirk's life from the beginning when he was born in 1952 until the last time I got some video of him sitting on the back deck of my younger brothers house in Streetsville.  The video was 'Classic Kirk'.  He was such a character and was a wonderful uncle to his many nieces and nephews. He was also well liked, even loved, by other people around the world that he had met on various consulting jobs and kept in touch with regularly via email.

After I created the Memorial DVD and gave it to immediate family and close friends, I broke the 1 hour video into five 12 minute segments and uploaded them to YouTube and sent the links out to his friends around the globe.  The response was enormous and the emails flooded in thanking me for an insight into Kirk's life as they watched him grow up and older.  I kept the YouTube videos private and only those with the 'link' could view them.  To show you an example of one of the parts (he was a big man that lived a big life) I've included a link here to watch one of the segments of my brothers life.

Now - instead of me plugging in the DVD and watching maybe 10 or 15 minutes to get my 'Kirk hit', I just navigate to one of the YouTube videos and watch a segment... then after a moment or two, I get back to work.  I'll never forget him and as long as I have internet access from anywhere in the world, I know I can watch any part of his life.  You can't imagine the feeling I get when I plug into his teen age years... or his business travel years... or his later years, because when I remember HIS years, those memories trigger my own. 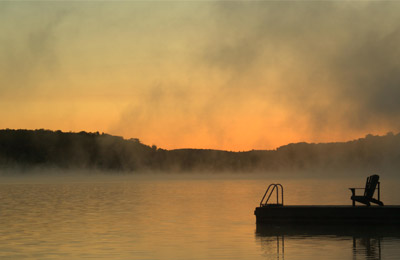 The photo of Kirk's dock on 3 Mile Lake in Muskoka, (used throughout my website) was taken by Marc Madersbacher.  Big Kirk started holding a 'Father-Son' weekend at his cottage every June starting in 2007 and his brothers and nephews and friends of his nephews would all come up for a weekend of work and fun.  The work was getting his cottage ready for the summer and the fun was waterskiing, playing cards, telling outrageous prevarications while sipping on a frosty carbonated alcoholic beverage. Marc always brought up his camera and was duely assigned as the 'official photographer'.  This picture was taken just before the sun came up on June 18th, 2007 while the rest of us were sawing logs and Mark was out looking for a 'Kodak Moment'.  Well - he found it!